This post is a visual tour of The Purple Turtles, a home decor, furniture, artifacts, garden accessories and lighting store in Bangalore. If you are a decor aficionado, the chances are bleak you haven’t heard of The Purple Turtles or visited the store. The store is located in Indira Nagar, the neighborhood has earned the reputation of being a heaven for home decor enthusiasts. There are a few traditional furniture stores in the vicinity you may want to check if you are around the area. Distressed Furniture, Vintage Frames & Lights Lights, Masks & Lanterns Crockery & Accessories Planters, Distressed…

I said grey. She (my interior designer) agreed to grey. We are talking about wall color here. When I walked into the new home, I was shocked. The wall was painted ….. ……..pink. “What happened to grey?” I asked. And she proudly pointed to the navy sofa.  Oh well, you get it. We have all lived to tell such horror stories of miscommunication when doing up a new home. There is an old adage my mom kept repeating through this nightmare project of furnishing our new home, “build a house and organize a marriage, and you’ve seen it all in…

“Your world can end in the blink of an eye. One event, one unexpected twist of fate… and suddenly the world as you knew it… is gone. Forever. All that you held dear, all that you held close… is washed away in a sea of distant memory. Life… is cruel. Of this, I have no doubt. But life continues on… with, or without you. One can only hope that one leaves behind a lasting legacy. But so often, the legacies we leave behind… are not the ones we intended.” — Queen Myrrah in Gears of War. I love this dialogue…

Today, I feature Be Vintage: the creation of a creative powerhouse, Monica, Grishma and Abhineet. They started this Bangalore-based brand a year and half ago to sell vintage, distressed furniture and home decor accessories. There are few brands/creations for which one picture is good enough to speak volumes of their work. And then, there are some where even ten don’t make the cut. Be Vintage falls under the first category. Monica couldn’t have reached out to me at a more appropriate timing; my eyes were tired of the clean/straight line overdose and vintage furniture amid all this comes as a whiff…

Nimish of Engrave was persistent in getting me out of this blogging hiatus. When the to-do list grows too long in my head, I make a note of it in a diary (yep, very old-fashioned unlike remember the milk) and take pleasure in seeing things crossed off the list. Then the list and diary are forgotten until the list grows again. For the past three months (blame it on the house project), the diary sits next to my laptop. And, there are things beyond your control that can’t be crossed off in a day or two. This post was not one of them that could not be crossed. So, I was determined today to get into action and bring a big smile on Nimish’s face.

Engrave is an India-based design collective engaged in the pursuit of creating unique lifestyle products with fine craftsmanship. Their products are personalized and designed to last a lifetime. Engrave offers plaques, canvas prints, name plates and a number of other handcrafted products.

The Engraved Plaque was one of the products I could relate to as we got one made with our pictures back in 2005. Canvas prints and the ganesha wall decal are my favorite on the site. If you don’t like a canvas print, then you customize it. I’m going to get the “why so serious?” one. 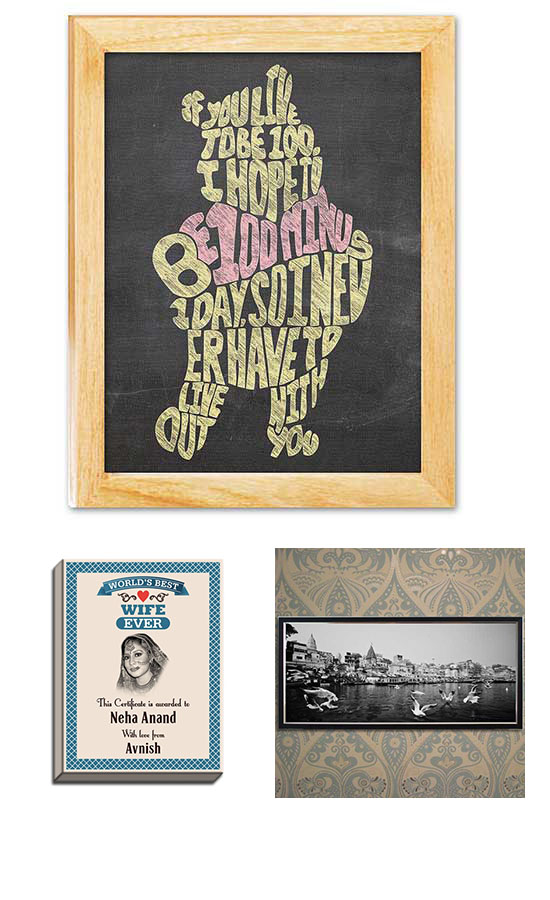 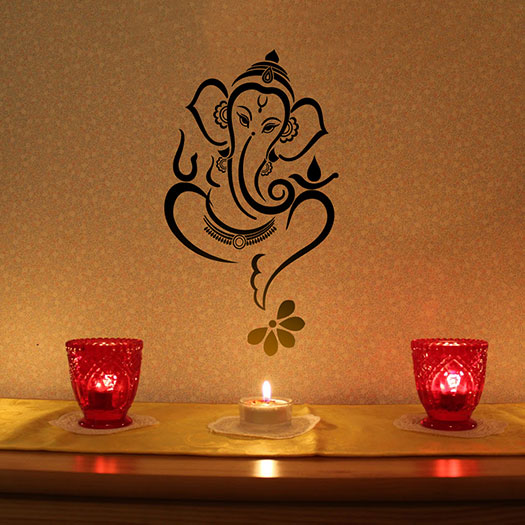 OK. You are on Facebook. Tell me how often do you NOT click on that ad in the sidebar?

Even for someone with a strong resolve, it takes a lot to not get distracted.

Oh there are zillions of stores. For everything under the sun. But, some stand out in the crowd. FB replies sometimes reveal so much about how a store is run and the person behind it: the warmth of the owner comes across in the choice of words, the transparency in sharing the knowledge about a product,  promptness in replying, humor ….

It’s not often that I reach out to someone to write about them. And let’s be honest, not every time that I want to contact a store, I’m able to reach out to them easily.

Meghaavi stood out from the crowd. I loved the logo. Jaya is the face behind Meghaavi, a fine home linen and furnishings store in Bangalore for the discerning buyer. I reached out to her on Thursday, and here we are with a post four days later. 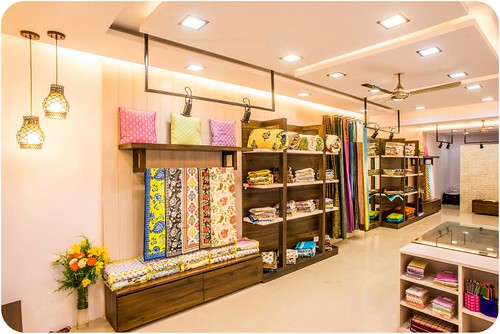 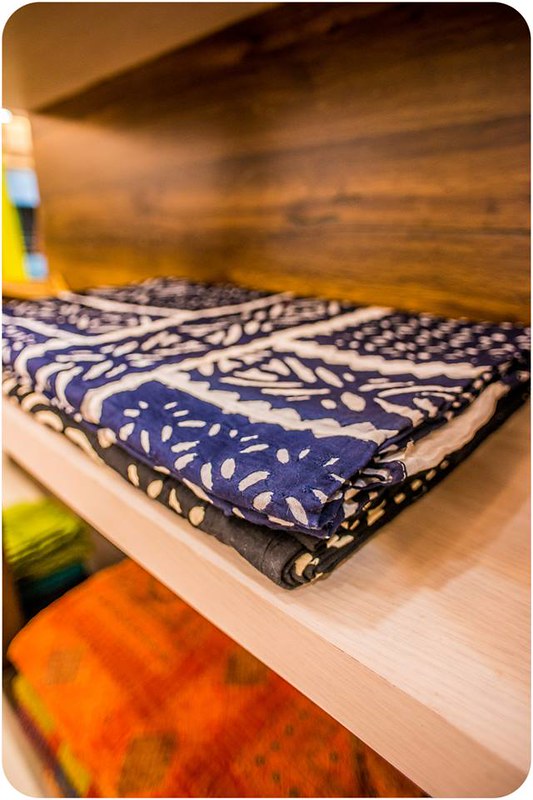 Here I’m picking on her brains to understand how she conceived the idea and what it takes to run the store.

1. How did you conceive the idea of the store?

Jaya says, “I am from an IT background. After quitting my last job, I was looking to change my career and do something creative. Whenever I looked at home furnishings in stores, I either found them lacking in quality and finish or too expensive. After having lived in the US for many years, I had become used to quality at an affordable price and felt that this segment was missing in the Indian market.”

2. One customer story that has reaffirmed your conviction in starting the store?
Jaya confidently recounts, “ There is not one story but many. And all of them relate to the customizations that have now become a big part of the business. I got four duvet covers made for my neighbour and friend Smitha who told me that the duvet covers available in the market were limited in design and that I should fill that gap. Or the baby basket that I designed for a friend’s sister’s grandchild with something old from the grandmother and a few things new designed by me. Or the table runners recently designed by me for Diwali gifts suggested by my friends Sharmila and Reshmi and bought by them as well.“
Read More

Hello everyone! How are you doing? I had a great start to the week with a fun DIY project yesterday – it’s not live yet but once it is you can read all about it on the Portico blog. I was browsing tirelessly for images of a exposed brick wall. My parents are constructing an independent house, and I’m quite excited about how certain parts will take shape. Having an independent house with a backyard full of trees is a dream and until that takes shape, I would be happy to experience it through theirs. The house is small but…

Let me ask you a question: what turns you on? Well, just think about it. For some, it’s music; for some, it’s spices or desserts; for some, a certain perfume and for the wieldy, power can be a great aphrodisiac. Color in a room stimulates my visual senses like nothing else. I find it a great therapeutic tool.

So, it comes as no surprise, that these images of Villa Meneghello, a tastefully decorated villa on the Hvar island in Croatia, has been sitting on my to-post folder for months now. What’s taken me this long when the inspiration is not so subtle, you may ask? Well, let’s just say, I didn’t find the right words to match these pictures. And now, I’ve just given up to give it the treatment it deserves through words. So, I’ll just let you enjoy the picturesque villa. 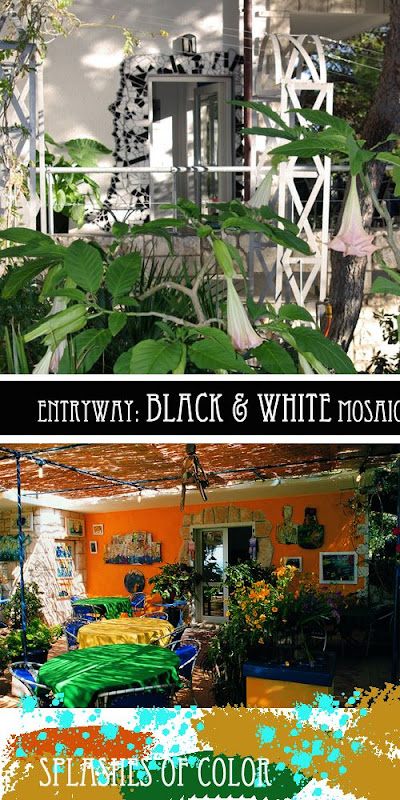 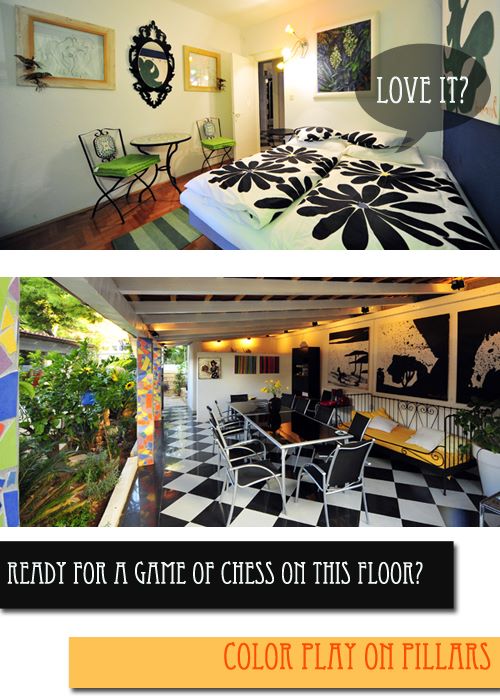 Hello everybody! It’s Friday and time for Shopping Friday post which will be up tomorrow as I have an exciting designer to showcase today. During one of my many FB wanderlust (which has been cut short this week because of Chrome Nanny :(), I came across images of a beautiful, breezy, street-side cafe kinda setting. Digging further, it turned out this pretty place was a cafe in Mumbai called Bong Bong.

Bong Bong is a restaurant in Bandra famous for its plus-sized portions and hard-on-waistline food. It was designed by Purple Backyard, a multidisciplinary design firm founded by Kumpal Vaid and Aditi Kotak in Aug. 2011. A glimpse of Bong Bong  set the standards high and left me craving for more. I wasn’t disappointed; Purple Backyard’s  portfolio is as resplendent as their name. The restaurant, in its new avatar, opened its doors on November 7th. A view of Bong Bong by night. This image spells warmth to me with its deep colors,hanging pots, casual seating in the verandah – in a word, welcoming! A place that looks like home and hopefully serves great food. Mumbai readers: just curious to know if you’ve been to this awesome looking place?

I got hooked onto Purple Backyard the minute I saw the picture below. It’s as if casual and sophistication got together in an effortless and unassuming way. It’s breezy, chic and rustic at the same time, intense and casual, and thoughtful with a  couldn’t-care-less attitude to it. But, most of all, the soft play of colors brought images of a Nordic street-side cafe to me. I don’t know why given that there are so many rich colors on exhibit here something one often doesn’t see there. I came across this resort called Malabar House in Kerala. Malabar House, Trinity, Serenity, Purity, Privacy – all the names of their various resorts in and around Cochin . Fancy that!

Turquoise love. A hint of turquoise against a white wall can work wonders. Complement it with soft furnishings and you have a winner. This room is in total contrast to the above one – darker tones set by the wooden walls and flooring. It’s more intimate I feel. That little strip of white wall helps define the space. Keeping the bed simple with a neutral colored spread reinforces the earthiness of the room.